Courtesy of The Press of Atlantic City.

PLEASANTVILLE — More than a decade after efforts began to relocate a drug rehabilitation center the Tourism District in Atlantic City, the move is complete.

“I cry over this. It’s so hard to believe this has finally happened. The relocation could be a good thing for the casino industry in Atlantic City because we would be located in the middle of the casinos,” Oberman said Tuesday.

In 2015, the CRDA spent $4.1 million to buy the John Brooks’ Tennessee Avenue site and the former YMCA it occupies around the corner on Pacific Avenue. At that time, the CRDA provided another $4 million to outfit John Brooks’ new locations.

The 20,000-square-foot site in Pleasantville will be able to service up to 700 clients, said John Flanagan, clinical director. Flanagan said the residential recovery facility will remain in Atlantic City. He said John Brooks has a constant waiting list to be admitted to the center and hopefully the new site will alleviate that delay and the organization will be able to serve more people. Flanagan said heroin use and overdoses are killing young people in the region at a rampant rate.

The New Jersey Division of Mental Health and Addiction data shows that 28,332 entered drug treatment in 2014 with a heroin addiction or other opiate. Data shows that’s more than 43 percent is nearly half of the 64,766 people who sought drug treatment that year.

Since 1999, overdose deaths involving prescription opioids have quadrupled nationally, according to the federal Centers for Disease Control and Prevention. During the perion from 1999 to 2014, over 165,000 people have died in the United States from overdoses related to prescription opioids. The overdose rate in New Jersey is more than triple the national rate. 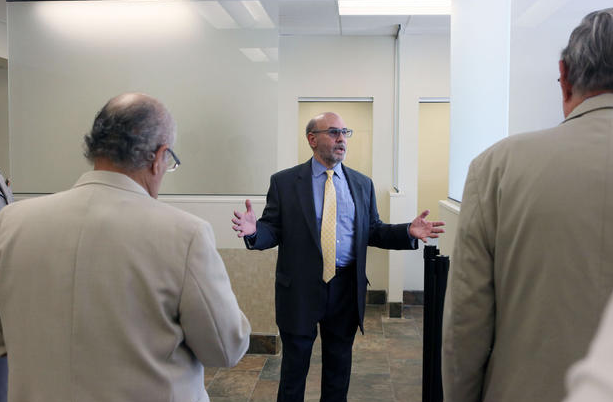 For many years, Pleasantville officials and residents pushed back against plans to move the facility to west and out of Atlantic City, an in 2014, the Planning Board voted down plans to relocate outpatient services of a the drug recovery treatment and prevention clinic from the Atlantic City Tourism District to the Pleasantville Shopping Center.

Mayor Jesse Tweedle attended the opening preview of the facility on Tuesday and said despite those efforts over the last few years, the site was approved for a facility of this kind and its permitted use.

Tweedle said after touring the building he is more at ease with the relocation to Pleasantville.

“There’s definitely a need for this in the region. Our cops have Narcan now to help with overdoses and they’re saving people. We are all working in a partnership and being proactive to step up and fight substance abuse,” Tweedle said.

Tweedle said he still has concerns for businesses located in the shopping center connected to loitering and other problems from clients using the recovery center.

“But Alan Oberman has assured us that will be under control,” he said.

Oberman said he knows businesses are concerned about this kind of activity, but the center will work to make sure it doesn’t happen at the site.

“Do I think I can say there will never be a loiterer here? Well, I can’t say that,” Oberman said.

State Sen. Jim Whelan, D-Atlantic, said the location of the recovery center is good because it is not impacting a residential neighborhood. Whelan said John Brooks is not desserting Atlantic City though.

“The reality is this drug abuse problem is not just in Atlantic City it’s also to the west and there are more clients from the mainland coming to the city for recovery services,” he said.

This site will offer intensive outpatient services for 30 adults and medication assisted treatment for up to 300 Atlantic City residents.

The opening of the centers was the first of two phases of an 8-year effort between John Brooks Recovery Center and the CRDA to relocate drug recovery services outside of the tourist district in Atlantic City.